So, I heard the news today that Fifty Shades of Grey written by E.L James has now outsold Harry Potter as the worlds fastest selling paperback and its definitely causing a stir! 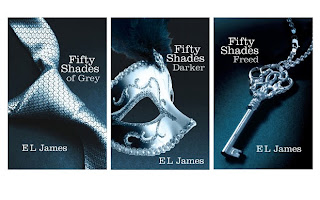 The story explores the growth of their sexual relationship and plays greatly upon the innocence of Anastasia and her sexual awakening. The sex scenes are erotic and the couple fall madly and passionately in love with each other. Very much like its Twilight comparison, there are times when I would have liked the use of a sick bucket as it had a tendency to become quite nauseating. They have an obession with each other that consumes every waking moment of their lives and it can be very difficult to stomach! Also, I would have liked the story to focus more on Christian’s history and the reasons why he enjoys this way of life. There was some exploration of his past but I didn’t think that this was enough for a reader to understand the motives behind the man.

Mr Grey is tortured by his inner demons and suffers from a need to control women, usually with BDSM. He attempts to entice the (eventually) willful Miss Steele into the world of a Dominant / Submissive relationship. At times I found this character trait extremely unnerving (in particular the need to control) and I really struggled to find any part of his character and its flaws endearing. The fear that Anastasia had of ‘upsetting’ Christian and making him angry made me very uncomfortable. I had a friend that was in a very destructive and controlling relationship and there were a lot similarities between the behaviour of her ex partner and Christian Grey’s behavior. There was a particular scene in the first book where Anastasia announces that she wants to visit her Mother which I found very difficult to read for this reason. Christian reacts very badly and she is extremely intimidated and frightened of his reaction. Reading about a woman feeling this way is not entertaining for me and I didnt like it one bit.

I really struggled to read the first book and didn’t enjoy it at all. I found it tedious and thought that it spent a lot of time mulling over whether or not the contract should be signed instead of an actual storyline. However, the pace did quicken slightly with the subsequent books and I could tolerate them better once Anastasia discovered that she did have a mind and a life of her own after all.

As a series I wasn’t overly impressed. There is a lot of hype surrounding the trilogy and I think that this may have done the series more harm than good as people tend to feel disappointed when they expect so much more. Christian is 26, absolutely gorgeous to the point where most women turn into blushing, incompetent idiots around him, he can fly or drive anything that crosses his path, he is rich beyond anybody’s wildest dreams and has sex like a machine! No rest period required between shags EVER and Anastasia only needs to look at him before breaking into her ‘shattering into a million pieces’ orgasm and its ALWAYS a multiple orgasm session. I didn’t find the sex scenes too raunchy either and even quite dull after a while. I ended skipping through them which says a lot for me!

The plot in my opinion, is quite weak and so much more could have been done with this story. Interesting events were always skirted over for another half baked sex scene and more instant multiple orgasms!

The series has done amazingly well though and seems to be taking over the world at the moment! I appear to be in the minority with my view on the book and I really do wish E.L. James all the best with her future career. The book has managed to outsell the books from the Harry Potter Trilogy and you can see how she has grows as a writer as each book progresses, the details become slightly more intricate and the storyline becomes a little bit deeper with every book. You can actually see how her confidence grows and that is nice to see!

Previous ArticleCosmo’s Most Ridiculous Sex Tips
Next Article The Karezza Method – Can you do it?