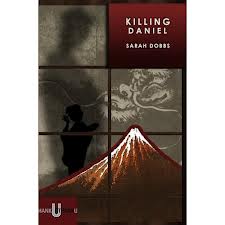 Killing Daniel is the debut novel by the lovely Sarah Dobbs and is available from Amazon for just £4.99. The book is a haunting tale of two old school friends Fleur and Chinatsu, who despite being at opposite sides of the world find their lives entwined in ways that even they never imagined possible. Both women have found themselves suffering at the hands of a violent partner and both women find the courage to break free. However, this isn’t without heartache.
The story dances between Salford and Japan and follows the desperate journey of the two women as they try to make sense of the difficulties that life has bestowed upon them. It is an articulate and well written book with an intriguing plot that leaves the reader thirsty for more. It’s a book that I struggled to put down. Both women often reminisce fondly of their old school friend but will they ever meet again?
The plot is easy to follow despite the fact it that tells two stories at the same time. The female characters are likeable it’s easy to empathise with the battles that they are facing. I found it to be a very dark tale and it isn’t a book that you take to the beach for an easy read. It’s a story that you think about for a long time afterwards.
Overall, a fantastic debut novel from Sarah Dobbs and I am looking forward to the next book already!
Please follow and like us: